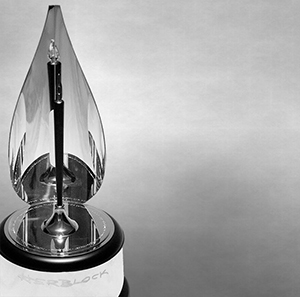 Ward Sutton on the Serious Business of Cartooning

Editorial cartoonist Ward Sutton almost didn’t win the Herblock Prize this year. Named for the renowned cartoonist, the award recognizes excellence in editorial cartooning. Ward was busy working in his studio in his Old Town Fort Collins home on a snowy Tuesday in February when he took a moment to check on the award’s submission deadline. It was that day.


Ward scrambled his day in order to put together his submission, all the while wondering, “Is this worth it? I never win these things…maybe I should just blow it off.” In spite of his musings, he emailed material to OfficeMax to get it printed and got a phone call shortly after asking if he was “part of some sort of an organization that has some particular agenda” and informed that company policy may not allow his cartoons to be printed.


Ward explained the nature of his work and the award and hopped into his car to resolve the issue. Upon arriving at OfficeMax, he was informed, “It’s OK. It’s OK. Freedom of speech.” Then the call came, letting him know he was this year’s winner. The awards ceremony was held in the Library of Congress, about two miles from the White House, the source of much inspiration. All in all, a dream come true.

And all it took was more than two decades of working as a freelance cartoonist—beginning with a self-syndicated strip and then working with publications such as The New Yorker, The Village Voice, The New York Times, The Nib, In These Times, , The Nation,Time, TV Guide, Rolling Stone, Fusion, and MAD Magazine, along with many others. Ward is also the pen behind Stan Kelly, The Onion’s editorial cartoonist.

Today’s news cycle (or perhaps cyclone) gives Ward a lot of material to choose from. “I can remember other times when I would be stumped, trying to come up with something that was a worthy topic. Now there is just more than I can operate on,” he says. “Something comes up and I want to do something on it, and it already feels like old news by the next day.” The self-avowed news junkie looks for his own take on the current environment when creating a cartoon. Ideas pop up and he pitches them to one of his editors. The next step is a script treatment that includes all the dialogue and setting. After some back and forthing, the final concept is clarified and then Ward starts the actual cartooning process. It’s not as easy as you might think. The image is the main communication vehicle, with the text supporting it. Too much text can take away from the power of the illustrations. A lot of finessing goes into the writing, and Ward can spend several hours working on a single sentence, getting it just right.


Digging out the humor and irony is part of the process. “It’s really easy too just list all the terrible things that are going on and then you have a terrible cartoon that just isn’t funny,” explains Ward. “The key lies in trying to point out the hypocrisies of what’s going on, and illustrate the players for who they really are. At the same time, I also don’t want to turn any of these people into some kind of funny character that people start to like. I try to steer clear of creating lovable versions of these people who are doing terrible things to our country.” What’s next for Ward Sutton, now that he’s won one of the most prestigious cartooning awards out there? “Well, I’d really love to do a New Yorker cover,” he says. “I got a call from the cover editor congratulating me after the announcement, so I think I’m going to pursue that.”


Hear that, New Yorker Magazine? Ward Sutton has you in his sights.

Michelle Venus is a freelance writer living and working in a little old bungalow in Old Town Fort Collins. She can be found pedaling her bike to coffee shops and happy hours, and is known to dance in the office. Any office.

Getting Through Tough Stuff